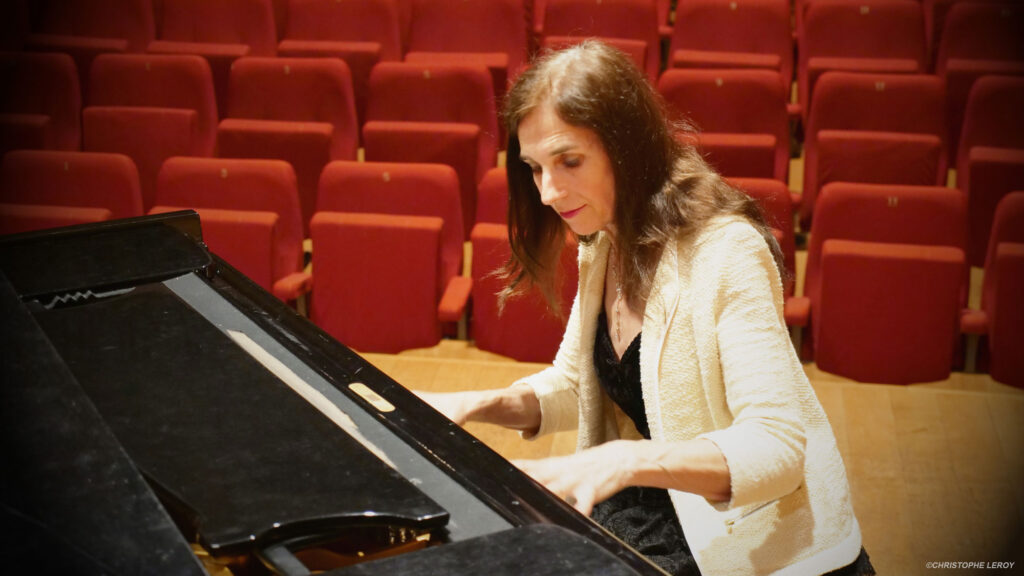 Françoise Choveaux takes up with a musical tradition anchored in the the 19th Century. She is a composer but also a pianist. As of today she has already written more than 280 op for all instruments and all formations, from solos to symphony orchestras. And her works are performed in all Europe and around the world; Asia, Russia & Baltic countries, North and South America.
Numerous live recordings and in studio were made of her music, among which the integral works of her quartets recorded by the famous Vilnius string quartet. The richness of sounds and colors for strings is a discovery of every moment. For a composer, I think that the string quartet offers infinite possibilities, similar to the use of a painter can make of its palette. It is one of the forms of writing that I prefer, she explains in the notebook of the CD.
Each of her her scores is inspired, either by journeys, emotions, or connected directly with a literary or visual work.from March 1999 ill March 2001, she was invited in the Abbey of Prée (Académie des beaux-Arts) as pianist and composer for a creation residence…
In her musical route, chamber music has always played an important role with works written for soloists( Jean Ferrandis, Gérard Poulet, Isabelle Moretti, Pavel Berman, Emile Naoumof, Michel Mikalakakos, , Jacques Mauger, Dominique de Williencourt, Whilhem Latchoumia, Romain Descharmes …) and also established formations. Her
quartets were created by Vilnius string quartet, Rimski-Korsakov quartet, Debussy and Ravel Quartet, Danel quartet and Stanislas quartet.
In 2002, she began an important cycle dedicated to orchestras. First of all, by pursuing her series with symphonies London primavera orchestra, Baden Baden orchestra, St Petersbourg orchestra, Toscanini Foundation orchestra, Vilnius Philarmonic orchestra, Sao Paulo orchestra, Bahia Philarmonic Orchestra, Bulgaria chamber orchestra
La prée orchestra for her White Symphonie for organ and strings world premiere in Notre Dame de Paris…
Françoise Choveaux was trained in the Academy of Lille, in Ecole Normale supérieure de Musique de Paris, in the Institute Peabody of Baltimore then Juilliard School of New York. She performed in prestigious festivals in France, in Europe, Asia north and south America.